RPZ defines a DNS zone format which provides a mechanism to override the DNS server’s responses by applying policy actions to triggers (such as the queried DNS name, or the IP addresses in the response).

RPZ Behaviors provide a mechanism to assign specific RPZ policy actions to individual targets and custom lists within a ThreatSTOP DNS firewall policy. ThreatSTOP provides a default set of RPZ behaviors as well as the ability to define customized behasviors. Typically, adding a custom behavior can be used to redirect traffic to a walled garden by overriding the response of the DNS server.

Default RPZ behaviors are managed by ThreatSTOP and available to every account. They can not be edited. The list of default behaviors is the following. Typically, policies use the NXDOMAIN action. 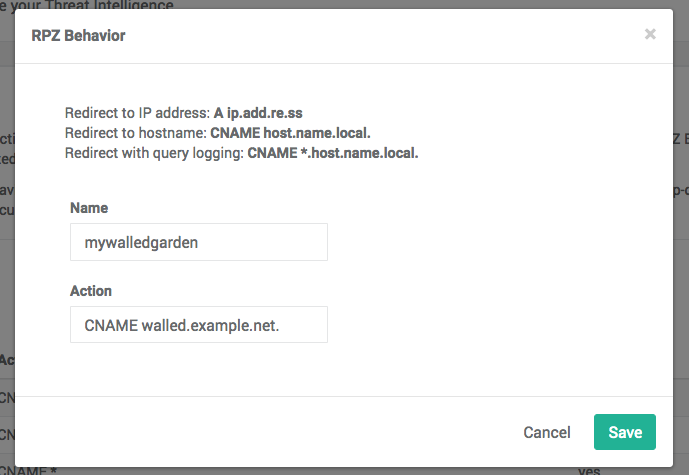 Using a wildcard action (e.g. *.garden.example.com.) will result in prepending the DNS name originally requested (e.g. bad.threatstop.com.garden.example.com.). Used in conjunction with a walled garden, this can be used to capture the original requested DNS name, for example by capturing the logs of the DNS server, or as the Host header of an ensuing HTTP request.