This document describes the integration process of the ThreatSTOP IP Defense with OpenBSD via Packet Filter (PF).

Note: The instructions below have been tested on OpenBSD v6.9, Contact ThreatSTOP support if you wish to attempt integration on an older version.

If this is a new device, please allow up to 15 minutes for our systems to be updated.

During the installation you will be prompted to install a few packages if they are not found on the system. The software is required for fetching the policy or for logging. You will be prompted to install them but we will list them below. Some of these software packages / libraries have dependencies of their own that may change over time, so we’ll just list the main packages below.

In addition to enabling pf, you’ll need to make sure you have at least a basic PF configuration file (/etc/pf.conf) to load during boot. Take a look at this guide if you need help getting started.

To retrieve its configuration and policy, and to upload log data, the device needs the following connectivity:

For users familiar with the installation process, we’ve listed the basic abbreviated installation commands below. If you are a new user, please continue with the detailed steps below.

During this step, you will create a device entry on the Admin Portal. You will select a device type (OpenBSD) and enter the configuration settings. A minimum configuration only requires a handful of settings but optional, advanced options are also available. 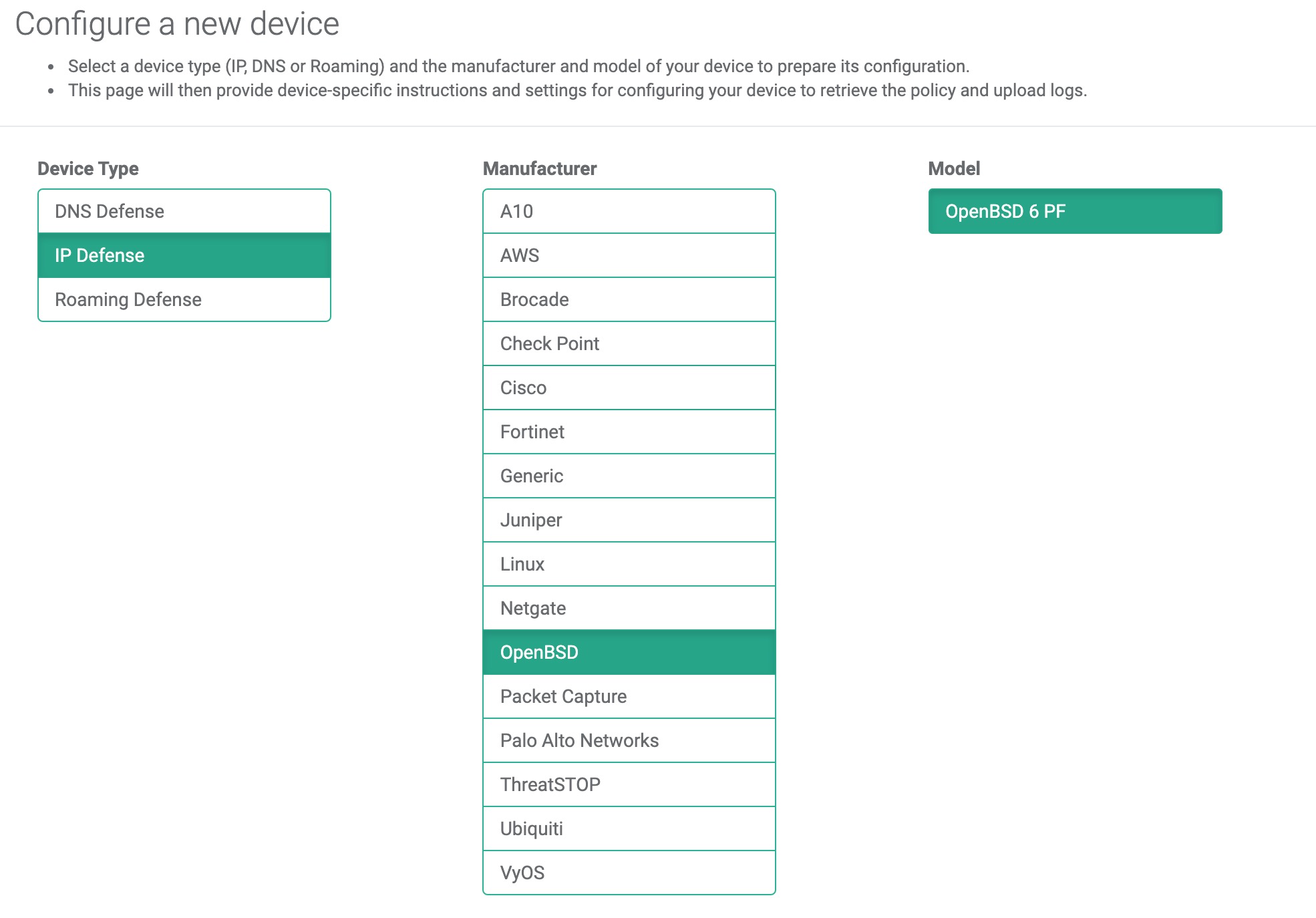 To create a BSD device entry:

The Admin Portal will display a form to enter the device settings described below and the links to retrieve the TSCM image.

Upon saving the form, a device entry will be created in ThreatSTOP’s cloud.

Note: It typically takes 15 minutes for new device IPs to become registered in the Policy service.

To download the ThreatSTOP integration software tarball, go to the devices admin page and click on the [INFO] button. You will see a link to download the latest software. If you are downloading it directly onto your device via SSH, right-click the link and copy the link URL.

Next, SSH into your OpenBSD device and run the following.

The integration software consists of a few perl, sed & shell scripts and configuration files. The details of which are listed below.

After downloading and extracting the software, copy the configuration file contents show below to a file named threatstop.conf in the same directory where the downloaded software was extracted (alongside install.sh).

Important: If you are not accessing this documentation through the admin portal / devices Docs link for your specific device, the configuration file shown below will be a generic example (tdid_abcd1234 is not a valid ThreatSTOP ID). If you access directly through the Docs link you will see a rendered configuration with your specific device details inserted, ready for copy & paste.

Next we’ll run the install.sh script which will do the following:

As root, run the the install.sh script:

It can take up to an hour for a new device to be fully provisioned on our backend servers, though usually ready in less time. We’ve included a test script (test.sh) to see if your device is ready on our servers.

After making sure the test script works, you can now run the main update script, /usr/local/sbin/threatstop-pf.sh. The script downloads the latest block/allow policies and creates the reference files PF uses to populate persistent tables. In order for PF to load any updates to the ThreatSTOP lists, PF needs to flush and reload the table. In the configuration file, there is an option to reload PF after the block lists have been downloaded. The commands that are run to do this are:

Once the files containing the addresses to block are created, you will need to configure PF to use the file as a table. In the /etc/pf.conf file, add the table definition:

With the table defined, you can create the rules to block traffic to and from the addresses in the table. We recommend that the rules to block the ThreatSTOP table be placed before any rules that allow incoming or outgoing traffic. The “quick” directive tells PF to treat the rule as the last matching rule. Any rules after it are not evaluated.

After you make the changes to the /etc/pf.conf file, PF will need to be reloaded to read the updated configuration:

To view the addresses in the table, run the command:

To view the updated rules, run the command:

OpenBSD PF can be configured to run as either a router or as a bridge, with some minor modifications to the router setup. This step is completely optional and only here as a quick reference. To setup a PF bridge a second network interface will need to be added to the network interfaces. To do this:

In the /etc/pf.conf file, use the configuration to the left, but append the following to the front of your configuration:

and after the configuration append:

Additionally you will need to omit the following line:

Now that the bridge configuration is complete, interface em0 will connect to your management device, em1 and em2 will need to each connect to different networks, such as your trusted and untrusted environments.

To finish, we’ll begin by testing if the ThreatSTOP test indicator of compromise (IOC, bad.threatstop.com -> 64.87.3.133) is found in the block table.

The next test will be to ensure the tables have been loaded by PF by attempting to ping or curl our test indicator of compromise (IOC), bad.threatstop.com -> 64.87.3.133.

From the output above we can see that the IOC was blocked successfully. Optionally, for a positive test, you could comment out the table entries, reload pf.conf and ensure the test IOC is accessible again.

Finally, testing logging is similar to testing the policy but we’ll want to first start a tcpdump session in one shell session, and run the ping test in another. You should see hits appear real-time.

Once you see this, let’s attempt to see if they were written to disk as expected.

Next we’ll test sending the logs to our servers for backend analysis.

It is important to see the ThreatSTOP Device ID (tdid) match what you see in the device portal.

If you decide to return to your pre-ThreatSTOP configuration, you will need to perform the following actions to disable and remove ThreatSTOP from your system: