This document describes the integration procedure to provision a ThreatSTOP DNS Firewall using our Docker container.

This document describes the integration procedure to provision a ThreatSTOP DNS Firewall using our Docker container. If you are unfamiliar with Docker containers, they are a simple way of packaging up an application and runtime environment into a standardized deployment mechanism. Our Docker container can be used stand alone via docker run, or in tandem when using docker-compose, Docker Swarm, or in a Kubernetes cluster. This means you can run our DNS Firewall on anything that supports x64 based docker containers. While this document will get you up and running most customers will use our sample deployment files as a starting point to customize their containers/environments.

The basic procedure is:

Networking varies depending on the type of container server you are running. However there are some general rules to keep in mind while planning the permanent networking installation settings for the DNS Firewall container. 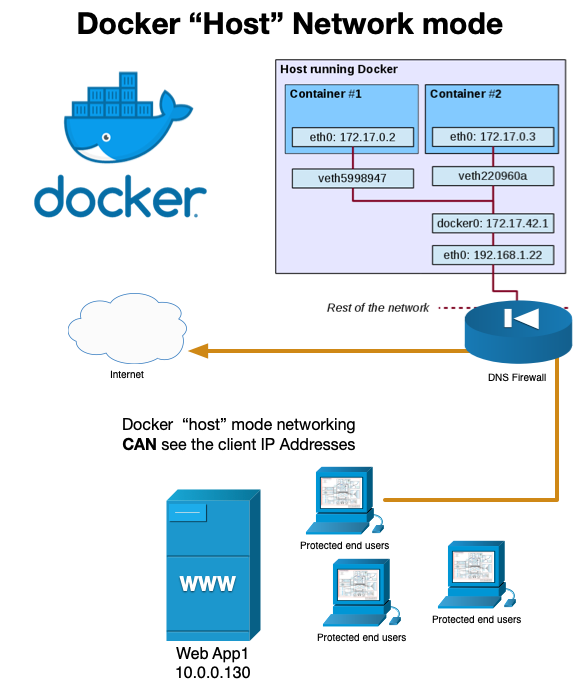 The following diagram shows the network topology of running host networking mode. Both Kubernetes and Docker implement this feature. The main reason we recommend this network mode over the default bridge container network mode is we expect clients will be on the same network as the Docker server. For example, let’s say we have a compromised machine on the network and we were running in default bridge network mode, we would not see the requesting clients IP Address. We would instead see the NAT IP address of the Docker server.

There are valid reasons to not run host network mode. For instance, if you are protecting a fleet of containers all located inside the container network you actually want to run without host mode so it is on the same network as the protected clients.

When creating a service definition or load balancer for Kubernetes keep in mind they all do NAT load balancing so you will likely be loosing the requesting client’s IP Address in the process.

You will need the following settings for the Docker container. These are here for reference, and are also provided in the download links after setting up the device.

ThreatSTOP image builds are available on Dockerhub and is the recommended method of installation.

The quickstart is intended for customers who are proficiently familiar with the integration. If you have not done this before please read the document in its entirety to ensure you don’t miss any important details.

Alternatively, you can use the provided docker-compose.yml file to start the container using Docker Compose

When the container is started the Webmin service is also started (if env variable WEBMIN_ENABLED=true provided) and is accessible from the web browser at https://localhost:10000. Login to Webmin with the username root and password threatstop. Specify --env ROOT_PASSWORD=secretpassword on the docker run command to set a password of your choosing for testing. For permanent installs you should be using mounted files to load sensitive settings see secrets handling for more details.

The following steps will walk you through adding the ThreatSTOP DNS Firewall container.

Note: It may take up to 30 minutes to provision a new device after adding it in the Portal.

To create the DNS Firewall container now that you have setup ThreatSTOP-side configuration:

You will want to manually test the DNS Firewall works as intended before deploying settings company wide just in case you need to adjust the TRUSTED_ACL. Next update your DHCP Server, or Active directory to hand out the IP address of the DNS Firewall(s) along with backups in the event it becomes unavailable.

Now that we have a working DNS Firewall we want to test the installation to verify a few things.

Verify we are blocking

Log into a machine that should be protected. You can omit the @<IP Address> if you’ve setup DNS server propogation correctly, but it doesn’t hurt to test both ways to verify the new DNS settings propagated correctly. We are specifically looking for the NXDOMAIN response when attempting to resolve bad.threatstop.com (our testing domain added to each policy).

Verify we are logging blocks

On the container server, launch an interactive shell into the dnsfw device. E.g. docker exec -it dnsfw bash

Verify we are uploading logs

To verify the installation is uploading logs correctly you’ll have to exceed the log size threshold set in the logupload container. You can check our docker-compose yaml or equivalent for an environment setting like: LOGROTATE_SIZE: 5K.

We can manually exceed the size by running a command like the one below or simply by waiting until the log naturally exceeds the size.

Now we wait until the cron interval has run. The default *\5 * * * * runs every 5 minutes. After the next scheduled cron run, you should see the log file has been rotated (moved to tdid_xxxxx.log.1) and a log of the transaction created as shown below.

For example, lets say you have some local Bind configuration in a file options.conf. To include that in the container we’ll simply mount the file and set the env variable NAMED_OPTIONS_FILE to point to it. Below is an example showing an exerpt from a docker-compose file.

If you need to customize Bind configuration files directly and want to avoid having the containers startup processes overwrite them you can simply add the environment variable CUSTOM_CONFIGS: "true".

You can customize the launch command of BIND server by specifying arguments to named on the docker run command. For example the following command prints the help menu of named command:

We use environment variables to drive different functions in the creation of the container. Environment variables can be either set on the command line or a docker-compose configuration file. For CLI either specify them like: docker run --env KEY=value or -e="KEY=value" . Important note: If using docker run, all env parameters must preceed the image name threatstop/dnsfw, parameters after will be sent to executed named process as positional parameters.

For docker-compose.yml files as shown below:

Below is a list of available environment variables and their functions.

You can also read in each variable in the form of a file, look to the way we handle secrets below as an example.

This example shows setting TSIG_KEY from TSIG_KEY_FILE via a mounted file from the local host filesystem.

For the BIND to preserve its state across container shutdown and startup you should mount a volume at /data.

The Quickstart command already mounts a volume for persistence.

SELinux users should update the security context of the host mountpoint so that it plays nicely with Docker:

Container volumes vary depending on container host software. We will briefly talk about Docker specific volumes below, most of which should apply to other systems.

Docker volumes are defined in the docker-compose.yaml file or via the --volume arguments. There are at least two types you should be aware of Named Volumes and Mounted Volumes.

Named volumes are created if they don’t exist. For example --volume logs:/var/log/named will create a Docker Named Volume called logs and mount it in the container at /var/log/named.

Conversly if you want to mount a directory and map it to a directory on the container you can just specify the absolute path on the left side of the :. For example --volume /tmp/logs:/var/log/named will create /tmp/logs if it doesn’t exist and mount in it in the container at /var/log/named. Keep in mind since this is the same filesystem if you are running SELinux there may be some enforcement issues doing this. You will have to explicitly create and grant privileges accordingly to get this type of volume working correctly while SELinux is enforcing.

Handling secrets like TSIG_KEY and ROOT_PASSWORD varies depending on the container hosting flavor you choose to run the container in Docker Swarm, Kubernetes, etc… We highly recommend looking to a proper secrets manager for your container secrets solution. See this video for some background on the topic.

For compatibility reasons, we set the secrets as file mounts. While it is possible to pass these in as environment variables we don’t recommend it past testing.

To upgrade to newer releases:

We’ve added a utility to quickly check the health status of your installed DNS Firewall container. This utility checks:

For checking the health of a running container run:

For debugging and maintenance purposes you may want access the containers shell. If you are using Docker version 1.3.0 or higher you can access a running containers shell by starting bash using docker exec:

If you are having trouble running the DNS Firewall due to an error binding to port 53 here are a few things to check:

Depending on the system & version you may also want to ensure the following line dns=default is in Network Manager configuration.

The built in script tsadmin health gives you a wealth of information in an easy to digest quick command. However some problems prevent you from getting the the stage where you can run it. You’ll find a few tips on troubleshooting those types of issues below.

The following will help you troubleshoot failures during container creation / bootup.

If you’ve verified enforcing SELinux is causing issues with the container you can update the security context of the host mountpoint so that it plays nicely:

Below is an example using nslookup, found natively on Windows machines.

Looking up a non-restricted website like google.com should return its current IP. You can repeat this on any client using this device as a DNS server.